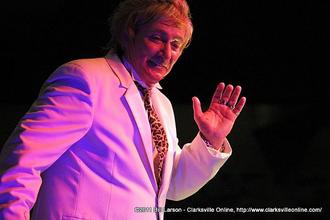 The REAL Rod Stewart met Steve Bobbitt at a concert and said, “It’s like looking in a mirror!” It’s amazing – Steve has the look, the moves, and the sound of Rod Stewart. Steve is an engaging performer who involves the audience in his show. Steve covers all eras of Rod’s career, from the early rock’n’roll of the 60’s, the folk-rock of the early 70’s, Rod’s disco period, the MTV period, on through the American Songbook series of recent years. Steve Bobbitt has the music, the moves, the costumes – the Rod Stewart Concert Experience!

Your trip includes luxury motorcoach transportation, lunch, and the show for only $129 per person!