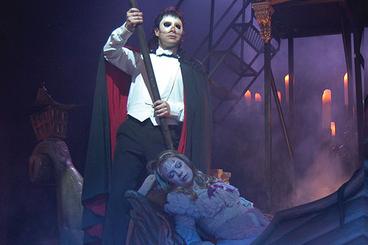 The haunting story of the “Phantom of the Opera” is lifted from the pages of Gaston Leroux’s novel and brought to the stage in this mesmerizing collaboration between Maury Yeston and Arthur Kopit. It's the passionate tale about the man behind the mask and his love for a woman and a world that he could never have.
"Rhapsodic music that entrances, moves and haunts... A welcome link to musical theatre's golden past."
The New York Times

Please note this is a show based on the "Phantom of the Opera" NOVEL. This show is called "Phantom", and is not the other theatrical show known by the same name as the novel. "Phantom is a musical with music and lyrics by Maury Yeston and a book by Arthur Kopit.
Based on Gaston Leroux's 1910 novel The Phantom of the Opera, the musical was first presented in Houston, Texas in 1991. Although it has never appeared on Broadway and has been overshadowed by the success of the 1986 Andrew Lloyd Webber musical, Yeston and Kopit's Phantom has received over 1,000 productions."

Your trip includes luxury motorcoach transportation, lunch, and the show for only $149 per person!